Interview with Will Arbery

“Mac Wellman says 'Write the play that you can write right now.' And that is the advice I give my students and friends. Things are broken right now. We might be writing broken plays, or plays filled with silence, with loneliness, with anxiety, with rage. This is a time of transformation and even if I write nothing during this crisis, I will be changed by it and hence the work will change.”
- Erin Courtney, The Interview Project: Erin Courtney, Full Interview
Clubbed Thumb

​“But it’s Courtney’s nuanced script that allow the actors to shine… Her lighthearted dark comedy is powered not by tired truisms of a disaffected wife’s psyche, but by seismic social disconnection.”
- Jessica Branch, Time Out New York

​“The playwright keeps Wren’s desperation comic by making her a whimsical screwball heroine…The demon baby turns Wren loose in her small circle of power couples; she stops being a recluse and becomes a guided missile.”
- Margo Jefferson, The New York Times
Alice the Magnet
​
“Unspooling an intricate choreography of contrasting personas, Courtney doesn't settle for mere issues, but plunges unflinchingly into the riskier realm of ideas. Essentially she offers us an examination of opposites, but the inherent tension of thesis-versus-antithesis never evaporates into dry debate.”
– Terri Gavin, nytheatre.com
A Map of Virtue

"A haunting, romantic story with a mystery at its center."
- Jason Zinoman, The New York Times

“A window into a resonant tale of loss, lives not lived and the unlikely moments that hold relationships together.”
- Jason Zinoman, The New York Times

"A piece of poetry whose form sculpts its content into a dynamic piece of art."
- The Huffington Post

"The play's flights of imagination pull you up for a ride."
- Time Out New York

"With a Hitchcockian sensibility, [Courtney] makes psychodrama out of the mystery of what keeps people together even as imaginations and egos push them apart. Like a souvenir from a fleeting dream, this play will pass over you painlessly, and then it will linger."
- Jason Fitzgerald, Backstage

“Ms. Courtney’s writing remains as compassionate as it is frightening, as familiar as its horrors are unknowable.”
- Alexis Soloski, The New York Times

“Erin Courtney is one of the few American playwrights willing to acknowledge and explore how supernatural currents can churn around our psychological lives.”
- Tom Sellar, Village Voice
I Will Be Gone

​“In between beautiful poems and angsty reflections, I Will Be Gone frequently finds itself turning into a horror film. In fact, Courtney moves effortlessly back and forth between several genres. At points, I Will Be Gone is a coming-of-age drama, an effectively scary ghost story, a memory play and occasionally a slacker comedy.”
- Eli Keel, Insider Louisville 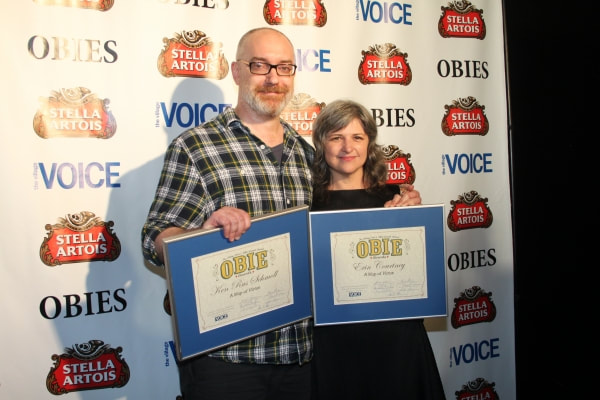